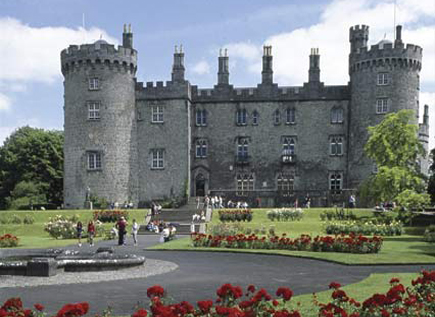 Kilkenny Castle (Irish: Caisleán Chill Chainnigh) is a castle in Kilkenny, Ireland built in 1195 by William Marshal, 1st Earl of Pembroke to control a fording-point of the River Nore and the junction of several routeways.

It was a symbol of Norman occupation and in its original thirteenth-century condition it would have formed an important element of the defences of the town with four large circular corner towers and a massive ditch, part of which can still be seen today on the Parade.

The property was transferred to the people of Kilkenny in 1967 for £50, and the castle and grounds are now managed by the Office of Public Works. The gardens and parkland adjoining the castle are open to the public.

The Parade Tower is a conference venue. Awards and conferring ceremonies of the graduates of “Kilkenny Campus” of National University of Ireland, Maynooth have been held there since 2002.

Midway Ireland Tours can bring you on a unique tour of this Castle, which is very centrally located